At the end of June this year partners of the Future Space project consortium took part in a teleconference. It’s main aim was to summarise last actions and planning of the further work within the project. Among participants were representatives of all partners institutions: Polish Space Agency, Computer Assisted Education and Information Technology Centre (OEIiZK), Science Museum in Amsterdam NEMO, Noesis Science Center & Technology Museum and Space Research Centre of the Polish Academy of Sciences. 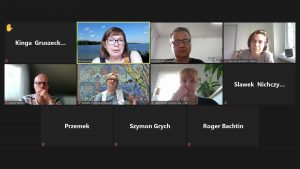 During the last couple of months new materials were issued and will be part of the Space School Programme. Among them are first lesson scenarios (piloted with polish schools),  interviews with the representatives of the space industry  and a catalogue of studies and courses. The main aim of videos and catalogues is to give students an extensive overview of possible career paths.

In coming months the consortium will work on additional lesson scenarios, which will be piloted in September this year by NEMO Museum. The effort will also be put on the Program for Educational Centers. It’s in final stage of preparation and will focus on different type of activities that can be performed by science and technology museum during their normal work as well as in the form of remote.